If you have a data table that is updated frequently, for example, a new column is added each month, you may want to find the sum of the last three columns. But, you don’t want to rewrite your formula each time you add a new column. Fortunately, you can accomplish this task with two lookup functions, INDEX and COLUMNS.

Let’s be clear about our objectives. We want to write a formula that operates on the last three columns. We do not want to modify the formula each time a new column is added. For example, the formula below computes the sum of the last three table columns, Apr, May, and Jun.

Next month, we’ll add a new Jul column, and, we want our formula to automatically sum the last three columns in the table, May, Jun, and Jul as shown below. 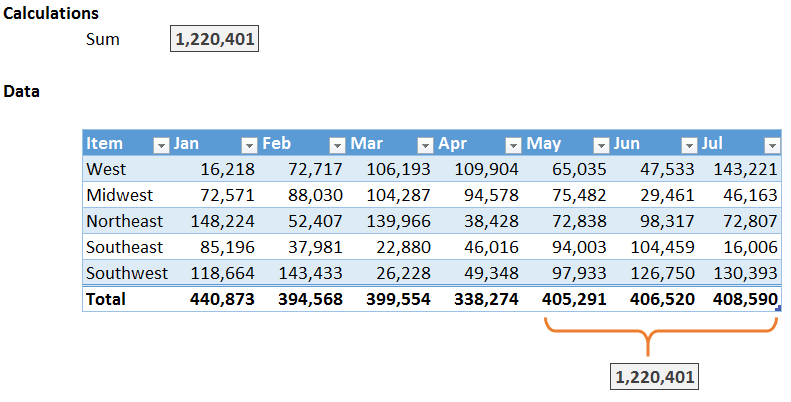 Excel’s COLUMNS and INDEX functions can be used as arguments in the SUM function so that the formula will automatically sum the last three columns in the table, even as new columns are added each month. Let’s walk through the details of the formula now.

The basic formula begins with a standard SUM function. Assuming our table is named Table1, we could add up all of the cells in the table with the following formula.

If we wanted to add up the cells in the 2nd table column, we could use INDEX to narrow down the reference as follows.

Let’s say that instead of adding up the 2nd column, we want to add up the last column. Rather than expressing the argument with an integer value such as 2, we want Excel to dynamically figure out the last column number. This brings us to the COLUMNS function which returns the number of columns within a range. For example, the following formula will return the number of columns in our table, which happens to be 8 at the moment.

As the number of columns in the table changes, the COLUMNS function updates it result as well, from 8, to 9, to 10, and so on.

If we wanted to add up the last column of the table, column 8, we could use the following formula.

Since the COLUMNS function updates anytime a new column is added, the formula will return the SUM of the last three columns of the table. If you wanted to sum the last 6 columns, you would simply subtract 5 instead of 2 from the first INDEX function’s column argument. If you wanted the last 12, you’d subtract 11, and so on.

If you have any other approaches to summing the final three table columns, please share by posting a comment below…thanks!