This post explores Excel’s lookup functions, approximate matches, fuzzy lookups, and exact matches.  The built-in Excel lookup functions, such as VLOOKUP, are amazing. When implemented in the right way for special projects or in recurring use workbooks, they are able to save a ton of time. The VLOOKUP function alone has saved countless hours in my recurring use workbooks. However, the VLOOKUP function, similar to Excel’s other lookup functions such as HLOOKUP and MATCH, is built to perform an exact match or a range lookup. Both of these are quite different from an approximate match or a fuzzy lookup. This post discusses the details of these ideas, and demonstrates how to perform a fuzzy lookup in Excel 2010 and later.

The built-in Excel lookup functions, such as VLOOKUP, HLOOKUP, and MATCH, work with similar lookup logic.  To simplify this post, we’ll use just one as the example.  Since the VLOOKUP function is probably the most used and most familiar lookup function, we’ll use it as we explore these ideas.

The basic idea of an Excel lookup function is to look for a value in a list.  For example, we could ask Excel to find “ABC Company” in a list of customer names.  That is the basic idea, but the application of lookup functions are numerous and the implementations can become quite sophisticated and powerful.

For this post, I’d like to split the tasks that a lookup function performs into two steps.  I’ll call step one the match, and step two the return. In the first step, the match, Excel must find the matching value.  You tell Excel the value to find, such as “ABC Company” and you tell Excel where to look, such as in a range of cells.  You are asking Excel to find the lookup value in the lookup range.

Let’s do a quick example at this point.

I would like to find a specific customer name “ABC Company” in a list of customers, and if found, I would like Excel to return the customer id which is found in the next column.

I would use a VLOOKUP function, and I would ask it to find “ABC Company” in the Customer Table, and return the ID.  Assuming the customer name was entered in C7, and the customers were stored in a Table named Table1, then the following function would do the trick:

This function is entered in C8 in the screenshot below. 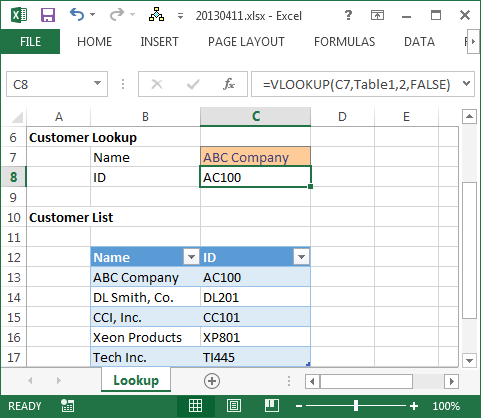 As you can see, the ID AC100 was successfully returned to the formula cell C8.  And that my friend is the basic idea of the VLOOKUP function.  Find a value (the match) and compute the result (the return).

It is important to note that the lookup value, the text string “ABC Company” must be found in the lookup range.  Except for case (upper and lower), the two values must match exactly.  “ABC Company” would not match “ABC Company, Inc.”, “ABC Co”, or “ABC Company   “.  No leading spaces, no trailing spaces, no extra abbreviations or characters.  They must be the same.  This is called an exact match.  If the value is not the same, the function will not match it, and you’ll get an error, as shown in the screenshot below. 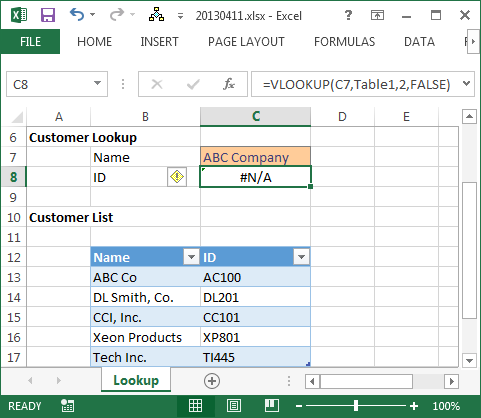 Now that we have covered the basics, it is time to explore the VLOOKUP’s fourth argument.

The Truth about the VLOOKUP Fourth Argument

The fourth argument of the VLOOKUP function is officially named: range_lookup.  It is a boolean argument, meaning you can pass it a value of TRUE or FALSE, or any other representation of TRUE or FALSE. The thing that tends to mislead Excel users is the description that Microsoft used for these options.  Excel describes the TRUE value as “Approximate Match” and FALSE as “Exact Match.” A clearer description would have been something like TRUE “You are doing a range lookup” and FALSE “You are not doing a range lookup” but in any event, the descriptions are what they are.

When you select TRUE (Approximate Match) you are not asking Excel to match values that are approximately the same as each other.  The description Approximate Match would tend to imply that the function would match “ABC Company” and “ABC Company, Inc.” since they are approximately the same name.  In some cases and in some data sets, this idea would work.  But this idea does not work in all cases, and thus, can’t be relied upon in our workbooks.  For example, in the screenshot below, the function did not find a match between “ABC Company” and “ABC Company, Inc.” as evidenced by the incorrect ID returned in C8: 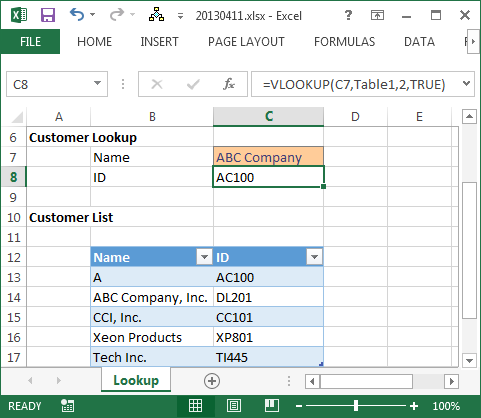 In the following screenshot however, the function did find a match between “ABC Company” and “ABC Co” as evidenced by the expected ID returned to C8: 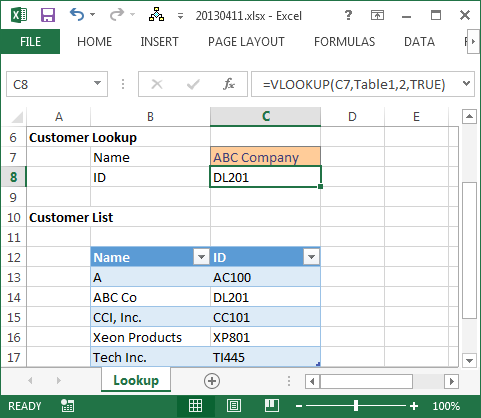 The way that the function actually works when TRUE is selected is this: it walks down the list row by row, and ultimately stops on the row that is less than the value and where the next row is greater than the value.  This is why the lookup range must be sorted in ascending order for the function to return an accurate result when the fourth argument is TRUE.

This idea can be confusing when thinking about text strings, but makes more sense when thinking about numbers.  For example, when trying to find the correct commission rate based on the sales value.  In this case, you want to perform a range lookup.  You want to look up a value from within a range.  This is illustrated in the screenshot below. 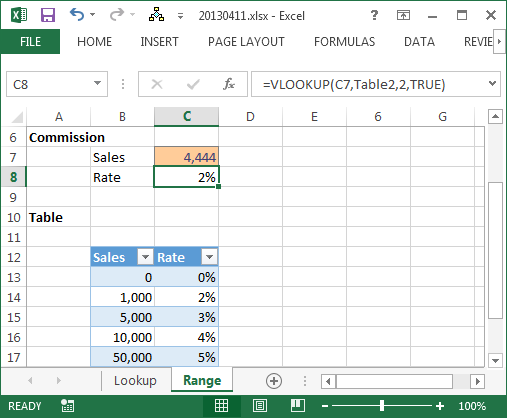 What is a Fuzzy Lookup aka Approximate Match

The idea of a fuzzy lookup is that the values are not a clear match, they are not identical. But that they are likely a match, there is a probability that they are a match.  They likely represent the same underlying entity.

Now that we realize the VLOOKUP function does not truly perform approximate match logic, at least, not in the way we want it, what do we do?

When you hit a wall, go around it.  Since the built-in lookup functions do not perform fuzzy logic when performing the match, we hit a built-in limitation of Excel.  Microsoft has offered a way to work around this limitation by offering a free add-in.

Microsoft offers a free add-in that enables Excel to perform fuzzy lookups.  It is called “Fuzzy Lookup Add-In for Excel” and is available at the time of this post at the link below:

You specify the two tables, and within each table the columns to inspect.  Basically, you define step one the match.  You then define step two by identifying which columns from the tables should be included in the result. You can also specify the probability threshold.  You hit go, and the add-in performs its work, and then outputs the resulting table starting at the active cell.  It basically generates a static report based on the settings you select.

Here is a screenshot of the output, showing that it successfully matched “ABC Company” and “ABC Company, Inc.” in the same data set that caused our VLOOKUP function to fail. 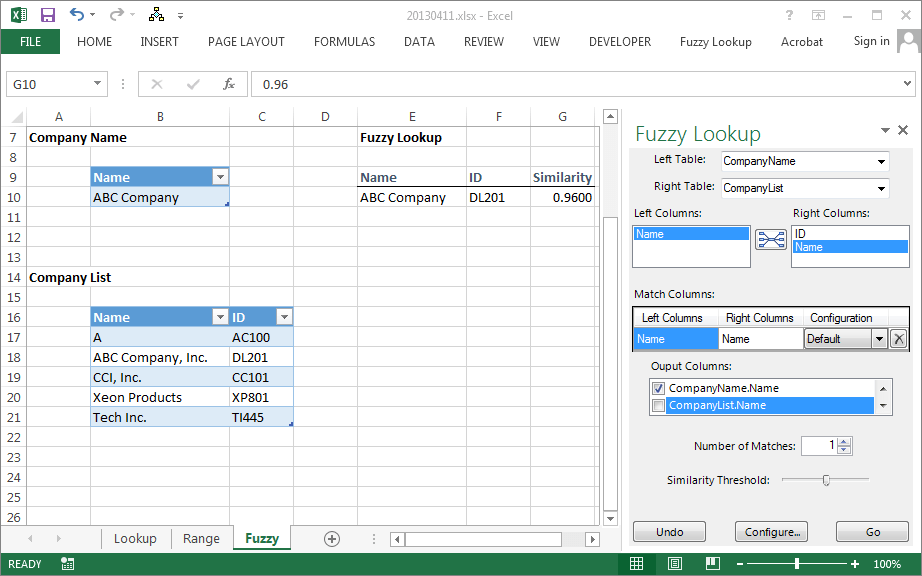 For more information about the fuzzy lookup add-in, and more detail on how to use it, please visit the Microsoft link above.  The add-in comes with instructions, a sample Excel file, and a pdf file with background and the logic it uses to do its magic.  It also comes with a license, so, you’ll want to be sure to read the license terms in the LicenseTerms.rtf document included with the download.

There is some extremely interesting computer science and math working behind the scenes, including Jaccard similarity, tokenization of records, and transformations.  Pretty heavy mathematics in there. Thanks Microsoft Research for this add-in!!