The terms Moving, Rolling, and Trailing are commonly used to describe the same calculation idea…that we want to operate on the previous say 3, 6, or 12 data rows. In this post, we’ll allow the user to define the number of rows to include and use the OFFSET function to dynamically define the desired range.

Before we get too far, let’s be clear about our objective. We want to allow the user to enter the number of rows to include. We want to write a formula that computes the average of the desired number of rows. This is illustrated below. 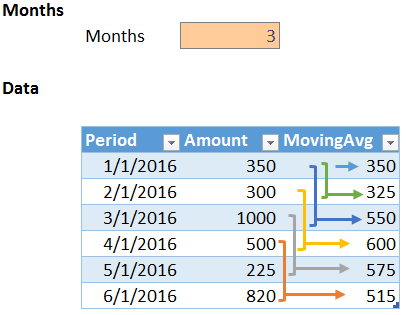 We also want to ensure that as we add new rows to the table in future periods, we don’t need to update our formula. One way to accomplish this is with the OFFSET function.

The volatile OFFSET function allows us to define a range via its arguments. The syntax follows.

For example, if we wanted to start at A10, move down 3 rows and move right 1 column, we could use the following function.

Now that we have the basic logic down, let’s use this with a table and allow the user to store the number of periods in a cell. We begin by converting the ordinary data range into a table with the Insert > Table icon. Next, we want to write a formula to populate the MovingAvg column. 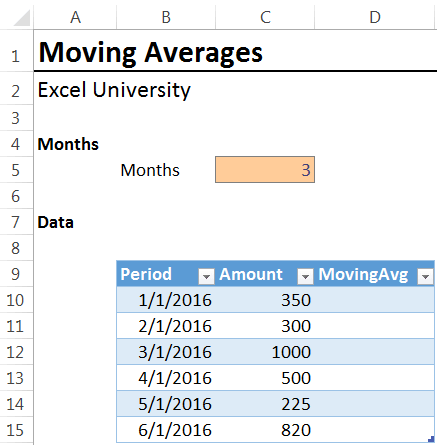 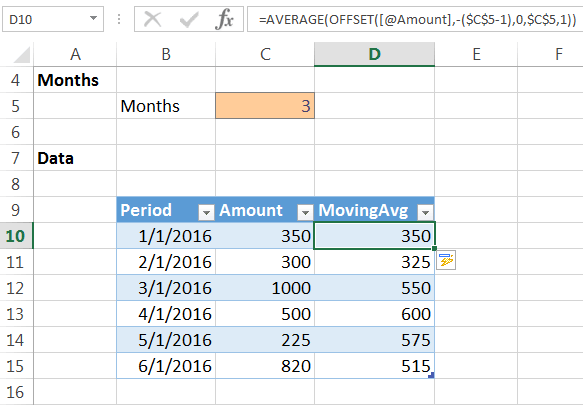 When we add another table row, Excel automatically fills the MovingAvg formula down, as shown below. 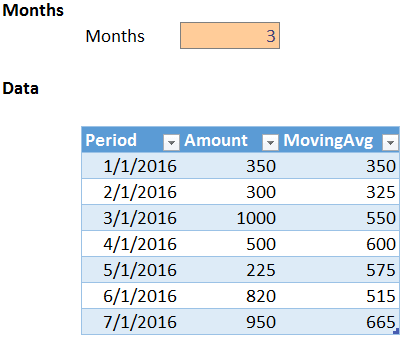 And, the user can change the number of months, as shown below.

Now, there is one optional enhancement to discuss. With the formula above, the OFFSET function creates a range for the first few table rows that may extend above the table. For example, the formula in the first table row begins a few rows above the table. As long as there are enough non-numeric cells above the Amount column, there is no issue. However, we can modify our formula so that the range returned by the OFFSET function stays within the table. This is done by computing the row number with the ROWS function, and then returning the MIN between that number of rows and the desired number of rows. The updated formula is shown below for reference, and is also included in the sample Excel file.

This is great, because now the user can specify the desired number of months, and our moving average formula will update accordingly. Plus, as new data rows are added Excel fills the formula down for us since we used a table.

Now that we have the basic idea down, let’s use an alternative to the volatile OFFSET function, the non-volatile INDEX function. The basic idea here is that the OFFSET function is volatile, which means Excel recalculates it anytime any value has changed, whereas, non-volatile functions are recalculated when precedent cells have changed. In summary, for small workbooks either function would probably be just fine, however, in large workbooks it is best practice to avoid volatile functions when possible. That is why the INDEX function is typically preferred.

The basic idea here is that we use the range operator to define the range, and the first side is the amount value in the current row. Then we use the INDEX function to return a reference to the cell that is say two rows above that cell. This can be accomplished with the following INDEX function.

If you'd like to be notified when I write a new Excel article, enter your name and email and click SUBSCRIBE. You can unsubscribe anytime, and I will never sell your email address.

Thanks for subscribing! We will send you an email each time we write a new article.

Something went wrong. Please check your entries and try again.

Our Campus Pass includes access to our entire Undergrad and Masters catalog. Gamification ensures it is the most fun you can have learning Excel :)