Previously, we explored using the INDIRECT function to refer to various tables in a workbook. In this follow-up post, we’ll expand the discussion and refer to individual table columns.

Let’s start with our objective. We have several tables in a workbook. They have the same structure and store department data. For example, here is the Department A table.

We would like to be able to select the table AND the column from drop-down controls, and have Excel use the selected table and column in a simple SUM function as illustrated below. 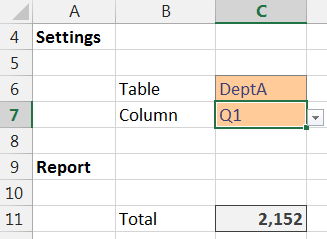 Alright, let’s get to it.

First up, let’s figure out how Excel’s structured table references work. A Structured Table Reference (STR) allows us to refer to a specific area within a table, such as a specific column. STRs begin with the table’s name followed by the specific area enclosed in square brackets [].

Referencing a specific column is accomplished like this: TableName[ColumnName]. For example, to refer to the Q1 column in the DeptA table, we would use: DeptA[Q1].

In addition to referring to specific columns, we can refer to specific rows. For example, to refer to just the header row of the DeptA table, we could use DeptA[#Headers]. To get a list of the available STRs, type the table’s name in a formula and then type the open square bracket. Excel will display a list of valid STRs in the auto-complete list, as shown below. 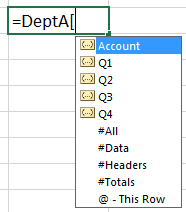 Now that we know the anatomy of STRs, let’s move on to the drop-down cells.

To create the drop-down controls, we’ll use the data validation feature.

The drop-down control in C6 is generated with the Data Validation feature by allowing a list equal to the table names. Setting this up was discussed in the previous post. 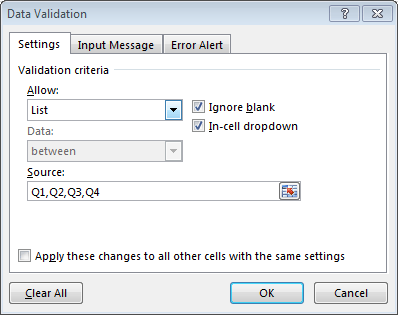 For example, let’s say that we ultimately wanted to sum up the Q1 column of the DeptA table. We could use the following formula.

But, rather than entering the STR directly into the formula, we want to store the table name in cell C6 and the column name in C7. So, we would build the STR using the concatenation operator (&), as follows:

Note: spaces are shown in the formula above to make it easier to read.

To convert the STR into a valid Excel reference, we’ll use the INDIRECT function, as follows.

Finally, we’ll sum the cells in the reference with the SUM function, as follows.

This will compute the sum for the selected table and column, as illustrated below.